The last update on accounting for insurance contracts was in 2004 with the IFRS 4, and it has proven to be incompetent in today’s highly complex environment. Thus, the International Accounting Standards Boards (IASB or Board) has developed a special project which aimed at:

The special project is named IFRS 17 Insurance Contracts (IFRS 4 Phase II or the Standard) – an International Financial Reporting Standards issued by the IASB on 18 May 2017. It will replace IFRS 4 and related interpretations. The result will be a complete overhaul of all insurers’ financial statements. Significant activities are already underway to implement the Standard.

The purpose of IFRS 17

The objective of IFRS 17 is to establish principles for the recognition, measurement, presentation, and disclosure of insurance contracts. The Standard requires insurers to provide consistently and transparently measured information in all insurance contracts (insurance liabilities need to be measured at the current fulfilment value) and disclose them using a more uniform presentation.

Under IFRS17, insurance contracts will:

Each element of a contract, its size, coverage structure, expected profitability can affect how insurers report their Contractual Service Margin (CSM). How contracts are aggregated or grouped can also impact the size and behaviour of CSM.

Grouping of contracts can limit the offsetting of profitable contracts against ill-fated ones, which is the subject of debate as it requires insurers to apply different reporting requirements as well as disclosing the onerous groups and their liabilities.

Thus, the Board has introduced IFRS 17's level of aggregation as guidelines to calculate and adjust CSM for grouping contracts.

When classifying contract groups, the Standards requires insurers to follow these three criteria:

Clustering contracts that have the same risk types and managed together.

Which is defined using the following principles:

Contracts that are issued more than one year apart cannot belong to the same assortment. Additionally, groups of contracts that meet multiple profitability criteria must be further classified into smaller annual or quarter cohorts, which typically represent an issuing period of one year or less.

Above, we mentioned the word "at initial recognition". What does this mean? In short, insurers need to identify which groups the insurance contracts belong to at the earliest time possible, which could be:

Once groups are established, they cannot be reassessed or modified for the entirety of the coverage period.

Under IFRS 17, there are three measurement approaches to help insurers define the value of their insurance contracts:

The model can be used for any types of insurance contracts, including reinsurance. Thus, it is the default model unless the insurer chooses to use a different variation, which then needs a justification to explain the selection.

The model aims at providing better comparability and transparency about the profitability of insurance contracts as well as better visibility into the insurer's financial health.

The approach is also called the Building Block approach as it breaks down its measurement components into blocks, such as:

In simple terms, the insurance contract value is calculated by totalling all of the above components:

The model helps determine the risk-adjusted present value of future cash flows (fulfilment cash flows) that the insurer expects to receive after the insurance contract is fulfilled.

The cash flows should be discounted to reflect the time value of money and any financial risk, while the risk adjustment helps to justify any non-financial risks.

The contract becomes loss or onerous when the fulfilment cash flows are negative or resulted in no CSM.

Viewed as the simplified version of the GMM, the insurer can use PAA for a group of contracts if and only if:

The "not materially different" criterion is violated if, at the initial recognition of the group of contracts, the insurer expects a significant variation in the fulfilment cash flows, which would affect the measurement of the liability for remaining coverage during the period before a claim is incurred.

All in all, the PAA follows GMM's principles but does not use the CSM concept. Instead, the liability for the coverage period is measured based on premiums received during the period.

Direct participating contracts are investment-related service contracts that at the initial recognition:

"A clearly identified pool of underlying items" can comprise any items, such as a reference portfolio of assets, the net assets of the entity or a subsidiary within the group that is the reporting entity.

VFA introduces the "variable fee" concept, which in simple terms, is a fee for services the insurer provides. The fee comprises the insurer's share of the fair value of the underlying items less fulfilment cash flows that do not vary based on the returns on underlying items. [source]

VFA-eligible contracts are contracts that disclose the determinable fee (which is displayed as a percentage of portfolio returns or asset values rather than as a monetary amount). Without a specified fee, the share of returns on the underlying items the insurer holds would be entirely at the discretion of the insurer, which goes against the purpose of IFRS 17.

The effective date for IFRS 17

Initially, IFRS 17 was proposed to become effective on 1 January 2021. The Exposure Draft Amendments (ED/2019/4) issued in June 2019 acknowledged concerns about the standard and implementation challenges and concluded to defer its effective date by one year to 1 January 2022.

The date was once again reconsidered. On 17 March 2020, the Board announced the new effective date for IFRS 17 would be 1 January 2023, two years after the initial proposal and 19 years after the release of its preceding standard.

This begs the question, will IFRS 17 be delayed for the third time? It is also the subject of many recent debates.

Insurers shall apply the Standard to all insurance contracts unless otherwise impossible. This applies to:

Contracts that are primarily used to outline the provision of services for a fee but meet the definition of an insurance contract: these types of contracts are still subject to IFRS 17 unless they choose to apply a different standard.

Insurance contracts that may contain components that fit under the scope of another standard (e.g., an investment or service component): insurers need to follow the Standard’s criteria to determine whether a non-insurance component is distinct and carry out an assessment, following reporting requirements using the appropriate standard.

To support insurers and others with the transition, the Board has established a Transition Resource Group, produced education materials, and actively sought to understand concerns and challenges that insurers have experienced while applying the new Standard.

Fun fact: Where are IFRS adopted? 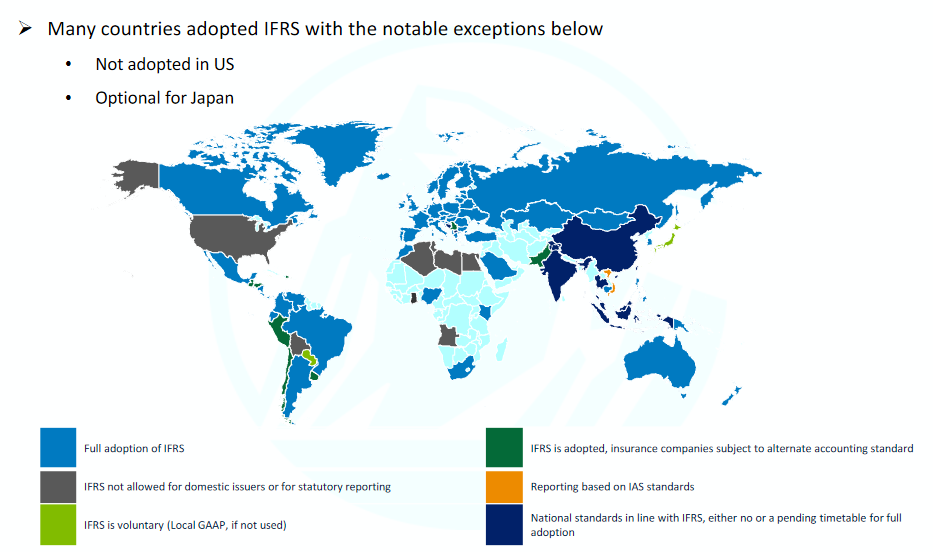 Subscribe to TRG Blog dedicated to Finance professionals to always keep up-to-date on the latest news, trends, and events occurring Vietnam as well as around the world.

To subscribe, simply fill out the form on your right hand side!

Security is a major concern in our industry. Using Infor solutions was instrumental in ensuring we were delivering features with a high level of security and data privacy.

TRG provides us with high-level support and industry knowledge and experience. There are challenges and roadblocks but it's certainly a collaboration and partnership that will see us be successful at the end.