What are Collaborative Robots (Cobots) and Why are They the Future?

A collaborative robot (cobot or co-bot) is a robot designed to work alongside human workers in a shared workspace. On the contrary, industrial robots typically operate autonomously and with little physical interaction with humans. The role of cobots in the Industry 4.0 will only get bigger.

Cobots are designed with safety as a key priority. The early cobots, introduced in the 90s, had no motive power, which was provided by the worker. Later models have limited amounts of power. Additionally, cobots have to be smarter than traditional industrial robots in order to safely assist human workers. They need to have awareness of the context, their movement, as well as the worker’s movement.

A cobot also tends to be smaller and more mobile than an industrial robot. These characteristics are essential for cobots and humans to work side by side. In fact, modern cobots usually have a human-sized profile to resemble its human counterpart. A factory can, therefore, install new cobots without extensive modification of the workspace.

Read more: How to Know If Your Job Will Be Stolen by Robots 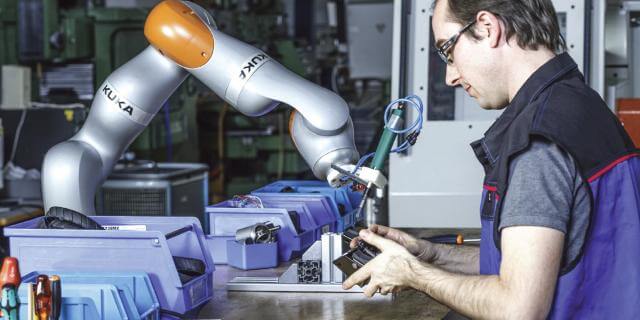 Why cobots are the future

Cobots provide manufacturers with unprecedented flexibility. They allow for partial automation of processes that still require human workers. Compared with industrial robots, most cobots have a simpler and cheaper setup process. They are also easier to be adjusted for different outputs. Small and mid-sized manufacturers will find these benefits highly desirable.

Cobots’ compact design helps utilise shop floor space. They generally do not require more working space than a human worker. Cobots are movable and can be set up and relocated with ease. They also ensure a safer working environment.

Cobots provide a better human-machine interaction and efficiency. Human workers do not need to wait for the machines to finish their jobs. With the traditional setup, a broke down robot can halt the entire production operation.