While the importance of leadership in business has been proven in multiple studies, how to define and measure leadership is still a controversial topic, especially when we take into account the context of today’s globalised business landscape, where it is commonplace for global corporations to move their managers from one country to another. Is effective leadership perceived differently among countries and cultures? Or is there a universal profile of great business leaders and managers?

Read more: An insight to leadership skills in the age of disruption

We set out to define and measure leadership in the context of globalisation. Data from more than 3,600 respondents in four countries – Vietnam, Norway, Romania, and the Philippines – was collected and analysed using a 360° System.

A 360° System is used to identify leadership & management as viewed by certain groups of individuals who know and have had the opportunity to observe the managers in the work setting.

This is accomplished with the collection of ratings from different sets of observers: the Managers themselves, Bosses (their superiors), Direct Reports (their subordinates), Peers, and Others (other observers like customers, suppliers etc.), and hence the name 360° system. 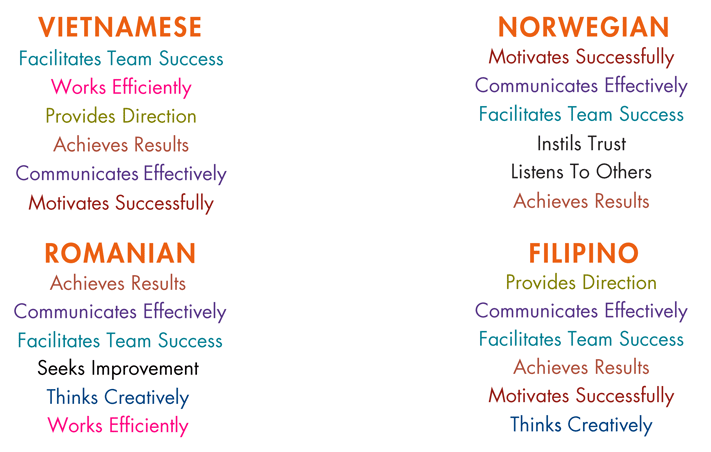 The perceptions of effective leadership and management

There are three skill sets that appeared across all four lists, and four skill sets appeared at least twice. In other words, 50% of the four countries’ most critical skill sets were identical. This finding indicates there is a significant similarity in how great leaders and managers are perceived around the world, regardless of cultural and geographical differences.

The three skill sets that appeared in all four lists are: “Facilitates team success”, “Communicates effectively”, and “Achieves results”. They are arguably the most important traits of effective leadership and management.

As effective teamwork has become an integral part of success in today’s business, managing teams is at least as important, if not more so, as managing individuals.

In a sense, business leaders and managers are supposed to be great team players because no one can single-handedly build and run a successful business. They are, therefore, expected to be able to resolve conflicts fairly in a spirit of cooperation, build consensus and lead teams in setting appropriate goals. Additionally, they need to recruit effectively and use the talents of the group wisely.

This skill is defined as the ability to express oneself clearly, both in writing and in speaking. Managers should be thorough, yet concise, consistently straightforward, and readily share information with others.

It may not come as a surprise as communication has long been considered crucial for success at work. For leaders, effective communication competency is even more important because it helps create a bond among employees and harness their collective effort to strive for the common goals.

“Actions speak louder than words.” Apparently, result-oriented business leaders and managers are highly regarded around the globe. The ability to overcome obstacles to achieve results that positively impact the organisation is what sets excellent managers apart. More important, they do not only get things done but also set high standards for others to follow suit.

While there is indeed a universal profile of great business leaders, do managers from different countries have different strengths and weaknesses? Download our full report now to find the answer.