Here's How You Can Measure Emotional Intelligence With Science

For years, emotional intelligence has been the subject of countless studies, best-selling books, talk shows, and press articles. Unsurprisingly, it has also attracted a fair amount of criticism and controversy.

Is there a concrete scientific foundation for emotional intelligence? Can it be objectively identified and measured? Or is everything just a feel-good pseudoscience?

In this article, we will explore the science behind our emotions.

Emotions are a state of feeling, the conscious mental reactions toward a specific person, event, or object, and typically are accompanied by physiological and behavioural changes in the body.

Read more: 7 Universal Emotions to Learn for a Higher EQ

Emotional intelligence (EI) or emotional quotient (EQ) is a set of skills or abilities that allow us to perceive, understand, and manage our own emotions as well as others.

How was emotional intelligence scientifically discovered and defined?

The history of emotional intelligence goes way back to as early as the 1930s. In the beginning, EI was mere "speculations" about "non-intellective aspects of a person that contribute to overall intelligence." Others categorised it as "social intelligence."

In the late 1970s, the concept started to emerge from various studies about seemingly unrelated topics about feelings and thinking.

During the 1980s, Alice Isen of Cornell University found emotions can affect how individuals facilitate particular tasks. She observed two groups of undergraduates completing the same task, one with a positive mood after watching a comedy movie and the other group with a neutral mood.

It was not until 1990 that emotional intelligence became the popular term we all know today. The term was conceptualised by Peter Salovey and Jack Mayer in 1990. The duo hypothesised that:

As a result, Salovey and Mayer's early definition of the concept was: "Emotional intelligence involves the ability to perceive, understand, utilise and regulate emotions."

Then, EI exploded and has become the topic of interest for many ever since. For instance, Dr. Daniel Goleman and one of his best-selling books, "Emotional Intelligence: Why It Can Matter More Than IQ" in 1995. The concept also made headlines in Time magazine in October of the same year.

In the early 1990s, neurologist Antonio R. Damasio and his colleagues at the University of Iowa came up with convincing evidence that emotion and reason are essentially inseparable. Their experiment involved two groups of participants, one group comprised of individuals with brain lesions but completely normal intellectual function.

The experiment involved a bit of gambling and was impossible to precisely calculate the risk, which forced participants to rely on their gut feelings if they did not want to lose. Participants with brain injuries failed to acknowledge these feelings and subsequently lost to the other group.

Damasio and his colleagues concluded that not only do people make judgements based on the severity of outcomes, but they also judge based on (and primarily) their emotional states.

Can emotional intelligence be objectively measured?

Any attribute being suggested as a form of intelligence must meet the standards of psychometrics – the science field of psychological measurement. Any EI test or assessment must demonstrate that it can do more than merely capture personality traits or information about other abilities.

There are three approaches typically used to measure emotional intelligence:

The self-report approach was developed first and went on to be the most commonly used method today due to its ease of administration and scoring.

Just like the name implies, the individual rates themselves, for instance, by agreeing or disagreeing with a series of questionnaires.

Self-report assessments are great for understanding what you think of your intelligence and, thus, could be used as an indication of your self-image. However, emotional intelligence consists of a variety of skills; and skills are best measured by ability assessments.

According to the "Feeling Smart: The Science of Emotional Intelligence" article published in volume 93 of the American Scientist in 2005 [source], using the self-report approach to assess a person's EI level presents a dilemma similar to asking whether they think they are smart. Also, it often incorporates facets of personality and character traditionally measured by personality tests.

If you are unsure of your degree of emotional intelligence and how your own emotional state influences others, why not ask people what they think of you?

Other-report or Observer Ratings assessments are based on this concept and are commonly conducted using the 360-degree instrument. People that often work and interact with each other are asked to rate one another’s emotional intelligence.

On the surface, this seems to be a legitimate method. However, if one member rated negatively on all aspects, does that translate to you being an absolutely terrible person who has a low EQ score? According to this person, you are, but that does not necessarily reflect your true self.

As a result, other-report may potentially be biased, but they provide interesting information and pinpoint gaps between what you think of yourself and how others perceive you.

To overcome the challenges posed by the previous two approaches, the first ability-based assessment, the Multi-factor Emotional Intelligence Scale (MEIS), was introduced in 1998.

This approach allows participants to actually test out their set of skills or abilities that make up their emotional intelligence level. In simple terms, how skilled do you think you are at typing? The only way to find out is by taking a typing test.

With ability-based or competency-based assessments, there is no correct answer. No single set of emotions is perfect for any specific situation. Each individual responds to each context differently. Nevertheless, there is a way to determine the best possible answer - through consensus research, i.e., there were hundreds or thousands of past participants who responded to the same assessment, from which researchers analysed and determined how frequently people selected each of the rating responses.

Competency-based assessments like the Genos model from Genos International, a provider specialised in EI assessments that TRG is proud to partner with, look at a person’s six core workplace behaviour competencies:

The assessments help individuals to understand how well they demonstrate their self-awareness, empathy, how they authentically express their feelings, create a culture of vulnerability and openness, how well they manage their emotions in front of others, etc.

The Genos model and assessments are available in multiple languages and can be conducted virtually, complete with detailed and visualised reports and recommendations for future development. Whether you are evaluating for yourself or a team, you can still benefit from Genos' award-winning model and flexible platform.

Whose EI should be put under evaluation?

Positions that require employees to handle a lot of emotional regulation and typically deal with other people daily are the ones that need a high level of emotional intelligence, for example, marketing, sales, and customer service. Even a technical role, such as a UX designer, also requires a certain level of EI as it can help the design team connect with their target customers.

Read more: How Emotional Intelligence Plays Out in the Virtual Context

Emotional intelligence is definitely critical for those in leadership positions. Employees nowadays look to their leaders not only for direction on how to do their jobs but also for engagement, mentoring, teamwork, and more. And leaders should be the ones who set the emotional state of the company, laying the groundwork for a workplace culture in which employees feel valued, cared for, informed, and understood.

As we are easing towards a business-as-unusual future post-COVID-19, emotional intelligence continues to be one of the most critical skills for leaders.

Emotions are a crucial part of being a human. Whether it is a positive emotion like joy or a negative one like anger, these are the driving forces that lead us to success and make us human.

Emotional intelligence, just like its analytical counterpart, IQ, is rooted in science and consists of skills and behaviours that can be observed, measured, and eventually improved.

It is never too late to go on the journey to find your emotions and make a difference. 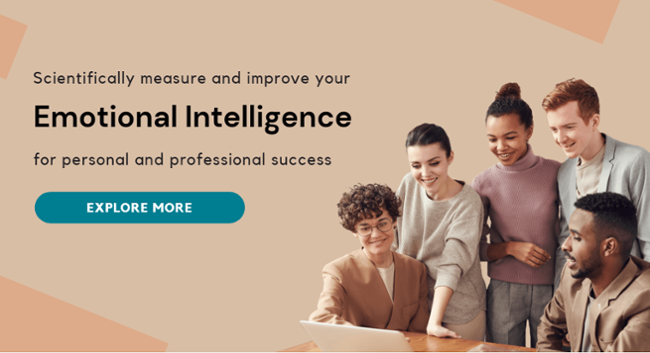