Cloud ERP solutions are one of the most prominent trends, and there is plenty of hype around this trend. Most major ERP vendors have offered cloud-based versions of their products and are encouraging their customers to upgrade from legacy systems to cloud offerings. A few vendors offer exclusively cloud systems. And while moving to the cloud has constantly been praised as the right direction, it must not be seen as the only option for companies looking for ERP.

Before you decide whether to choose a cloud or an on-premises system, there are several essential questions to which you need to know the answers.

What is cloud ERP?

When talking about this type of ERP, the terms "cloud ERP" and "Saas ERP" are frequently used and considered interchangeable. In fact, cloud technology is a rather broad term, which encompasses SaaS. Two main deployment models exist for cloud ERP systems—the SaaS model and the host-based cloud model.

For the SaaS model, the software is not directly owned, but rather, it is rented by your company and accessed via an internet connection using a web browser. The software is hosted on virtualized servers that belong to the ERP vendor or another third-party company.

Pricing is usually subscription-based, i.e., you pay a monthly or yearly rental fee. With SaaS, you typically share the same multi-tenant version of the ERP software with other customers, but your data is still isolated and secured. The ERP vendor will be responsible for software maintenance and upgrades, as well as security.

Consequently, skipping software updates is no longer an option for SaaS users even if they deem such updates unessential. So you should pay attention to the vendors’ roadmaps if you’re considering the SaaS model. You also cannot skip the maintenance charge, which is already included in the rental fee.

With the host-based cloud model, you own your software’s perpetual licence, but you do not load the software onto your server(s). Someone else, either the ERP vendor or a partner, will host it for you. So you still access the software via the internet, though unlike with the SaaS model, you control which version of the software you are using and are not necessarily required to upgrade.

In many cases, when vendors mention “cloud ERP”, they are actually referring to the SaaS model.

As opposed to cloud ERP, traditional on-premises software is installed locally on your company’s computers and servers. You have a permanent licence to use your software, for which you have to pay an upfront licence fee. On top of that, there is an annual maintenance fee.

The following table summarises the key differences between on-premises and cloud-based deployment models.

Is cloud ERP the only way to go?

Nevertheless, cloud ERP’s market share is rising fast. For instance, 29% of SAP’s ERP implementations in 2015 were cloud-based, while in 2013 that number was only 18%.

On-premises ERP systems still have some significant advantages. They offer the greatest customisation ability and can function without an internet connection. Additionally, companies have more control over their implementation and maintenance.

In recent years, market leaders like SAP, Oracle and Infor have increasingly focused on the cloud and rolling out their own cloud offerings.

Oracle founder Larry Ellison used to be sceptical about cloud computing but has changed his stance in recent years. Oracle now features both on-premises and “on demand”—another way of saying “cloud”—deployment options for their key offerings. Last December, Oracle acquired NetSuite in a US$9.3bn deal.

Meanwhile, Infor is betting on its partnership with Amazon Web Services (AWS), the world’s largest cloud infrastructure provider. AWS has over five times more storage and computing capacity than the next 14 competitors combined. Infor focuses on bringing vertical-specific functionality to the cloud. Infor CloudSuite Industrial, for instance, is targeted at small and midsized discrete manufacturers.

Lower cost is often cited as a major advantage of cloud ERP. While cloud-based solutions are generally less costly in the short-term, in the long run, there is a break-even point.

The SaaS model allows you to avoid upfront investment in hardware. A stable and fast internet connection is sufficient. Additionally, you do not need dedicated IT staff to deal with your in-house hardware and network issues. This represents massive savings, especially if you are a midsized company. Faster implementation also leads to cloud ERP’s lower entry costs.

However, you must continually pay the rental and maintenance fees, which over time may exceed the upfront costs for an on-premises solution. If your company is a large enterprise and has already invested substantially in hardware, using cloud ERP may not be a rational decision.

Is cloud ERP as secure as on-premises ERP?

Some executives may find the idea of keeping their data in the “cloud” risky. But cloud ERP is actually as safe as or even safer than on-premises ERP. As of today, there has not been a single security breach at any major cloud ERP provider. It is not surprising given the fact that such companies typically employ full-time teams of professionals who can provide far better security than a typical internal IT team.

What’s more, major cloud service vendors are independently audited and certified to ensure they comply with a wide variety of industry standards, including those concerning security.

Another aspect of cloud security is data recovery and redundancy. When your data is stored in the cloud, it is backed up regularly and often stored in several places. Most on-premises implementations do not have that level of redundancy.

In the 2nd part, we will discuss benefits and drawbacks of cloud ERP, and answer the question which types of organisations should consider cloud ERP. Subscribe to our blog now so you won’t miss it! 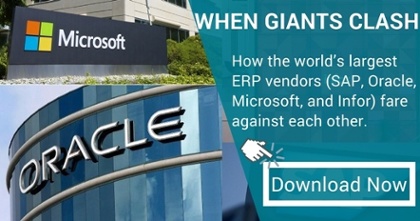