Why the MBTI Personality Test Is as Useful as Astrology

What’s your personality type? ESTP, INTJ, INFJ, or maybe something else? If it all sounds familiar to you, most likely you have taken or heard about the Myers–Briggs Type Indicator (MBTI) model before. In fact, MBTI is possibly the world’s most popular and widely used personality assessment; roughly 2 million people take it annually. It is the most (over)hyped assessment, too. 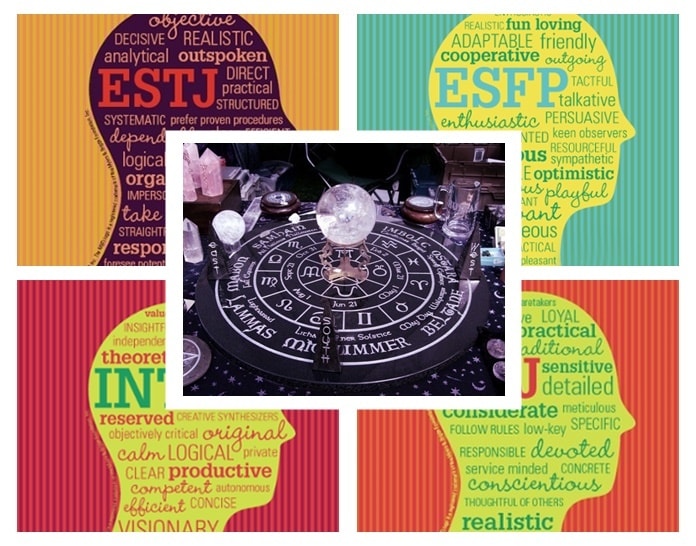 A popular test that is disregarded by psychologists

The MBTI was created by two Americans, Katharine Cook Briggs and her daughter, Isabel Briggs Myers, during World War II. The model was based on a 1920s’ theory proposed by Carl Gustav Jung, a Swiss psychiatrist and psychotherapist. By answering a list of 88 to 93 questions, MBTI’s participants can be grouped into 16 personality types.

The concept of MBTI is that each individual’s personality consists of 4 dimensions, and each dimension has 2 possibilities. These dimensions and their corresponding possibilities are:

In total, there are 16 combinations, or 16 personality types, and are referred to by an abbreviation of four letters. For example, the ISTJ type represents Introversion (I), sensing (S), thinking (T), and judgment (J).

The MBTI’s dimensions are typically called the four dichotomies because, in each dimension, you can only be assigned either one of two possibilities. 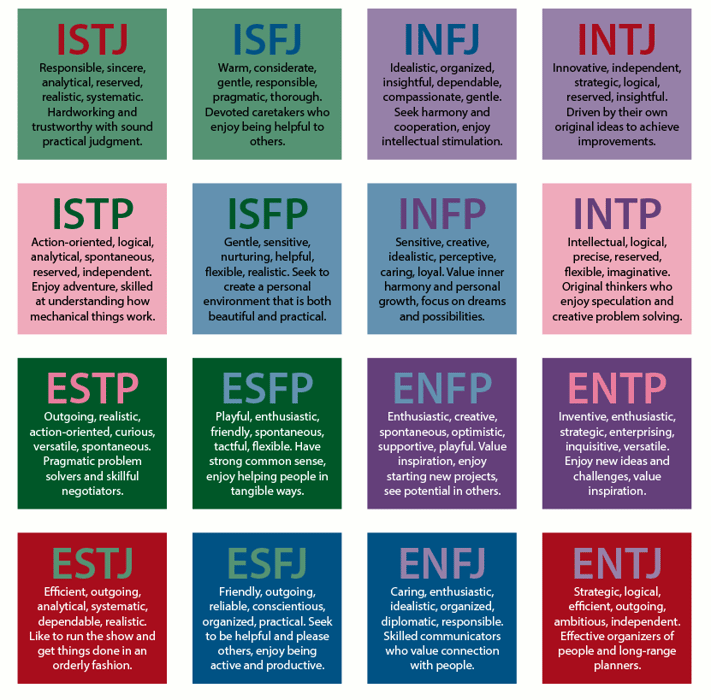 The test is frequently applied in education, recruitment, career counselling, corporate training, professional and personal development. 89 of the Fortune 100 companies, along with about 200 US federal government agencies, are using this test to assess their employees and job candidates. The MBTI has been translated and adapted into over 20 languages. CPP, the company that administers and markets the test, makes a healthy $20 million in revenues annually.

Read more: How is talent management about to be permanently transformed?

Regardless of its popularity and commercial success, the MBTI is almost disregarded by the entire psychology community. The test has rarely been mentioned in any research published in major psychology journals, except for articles that criticised the test.

The only journal that frequently publishes something about the test is The Journal of Psychological Type, which ironically is supported by the sales of the test itself.

Why do psychologists unanimously disapprove of such a popular personality test?

The MBTI is based on Carl Jung's theory of psychological types, first published in 1921, in which he proposed four dominant human cognitive functions (thinking, feeling, sensation, and intuition) that were somewhat similar to the later MBTI’s four dichotomies. This theory, however, was purely based on Jung’s subjective observations and experience rather than any empirical evidence.

Read more: The waiter rule and how to reveal a job candidate’s true self

Before reading Jung’s theory, Katharine Cook Briggs herself came up with speculation that personality falls into four temperaments: meditative, spontaneous, executive, and social.

Such typology was also based on her own observation of her family members. Neither Katharine Cook Briggs nor Isabel Briggs Myers was a certified psychologist. Instead, Myers learned techniques of test-making and statistical methods from Edward Hay, a personnel manager at a Philadelphia bank.

In other words, the MBTI is a brilliant product of pure speculation and hypotheses unsupported by scientific data and controlled experiments.

The cornerstones of scientific methodology are validity and reliability, all of which are sorely lacking in MBTI. Additionally, the test also suffers from a poor utility, i.e. practical use.

Read more: A deeper dive into the importance of psychometric assessments

Validity refers to a test’s ability to correctly meet its aim. In this case, the test should be able to identify and categorise different individuals’ personalities. The MBTI’s poor validity partly arises from its use of the 4 dichotomies.

In reality, human personality traits fall within spectrums (e.g., the degree of introversion) rather than binaries (e.g., either introversion or extraversion). There is little chance that a person is either an absolutely introvert or extrovert. Virtually all of us are somewhere between those two extremes.

Most scientific research proves that personality traits closely follow a normal distribution, i.e. most people are in the middle of the scale. For example, around 68% of people can be described as mildly introverted/extraverted. Only 16% can be considered clearly introverted or clearly extraverted. As a result, the MBTI’s approach fails to assess personality accurately in real life.

Reliability refers to the consistency of the test. In particular, when the test is taken by one person more than once, it should still yield the same result. In this regard, the MBTI test also performs very poorly.

Research has indicated that up to 50% of people get two different results when taking the test twice, even though the second test is only five weeks after the first one. The general industry standard is between 70%-90%.

Given its poor validity and reliability, it is little wonder that MBTI’s value is almost limited to entertaining. In 1991, a review committee of the United States National Academy of Sciences concluded that there was "not sufficient, well-designed research to justify the use of the MBTI in career counselling programs.”

Though MBTI is widely reported as a powerful tool to determine job fit (i.e., which career you should choose), researchers find that the percentage of MBTI types within each profession is close to that within a random sample of the population.

The MBTI, therefore, is practically useless in predicting people’s possibility to perform well in specific jobs. Even the MBTI’s published ethical guidelines state: "It is unethical, and in many cases, illegal to require job applicants to take the Indicator if the results will be used to screen out applicants."

The MBTI Manual also explicitly discourages using the test as a predictor of job success. Despite all this, millions clearly ignore the warning and use it anyway.

Why is MBTI still wildly popular?

The MBTI continues to do very well due to the same reason why astrology is still so beloved. No matter what type you fall into, your description is full of positive, flattering words like “action-oriented”, “gentle”, “creative”, or “enthusiastic”. Consequently, people are all beyond delighted after finishing the test, and hence, hold a favourable view of it.

The MBTI’s participants also experience the Forer Effect, named after psychologist Bertram R. Forer. In his experiment in 1948, Forer gave a group of students a psychology test. One week later, he gave each student a supposedly personalised result consisting of 13 statements about that student’s personality; most students considered their results very accurate.

In fact, all of them were given the same 13 statements taken from an astrology book. Those statements are vague and general enough to apply to most people. The students read their own meaning into the statements and thus considered them “personal.” The same could be said for MBTI’s results.

Another explanation for MBTI’s popularity is its simplicity and easy-to-understand attributes. Pretty much anyone can read the results without training whereas other scientific assessments often require some expertise to interpret the results.

Note, however, that MBTI requires you to have special qualifications as the MBTI “is a psychological instrument, it is restricted, and specific educational requirements are necessary before you can purchase and use the assessment[1].”

What test should you choose?

If your organisation is genuinely serious about personality assessments and performance prediction, you should rely on scientifically proven tests such as the five-factor model or GPI.

But what exactly is a scientifically proven test? First, it must be built upon proven, supported theory (or theories.) Second, it must satisfy the validity, reliability and utility principles. And finally, the test result should be accompanied by professional interpretation and consultation from qualified experts.

Organisations, however, must keep in mind that even a valid and reliable personality test is not enough to predict job performance and job fit. An effective employee assessment should cover all relationships between personal attributes and performance potential. The GPI assessments, for instance, measures 3 broad aspects of Thinking Style, Behavioural Traits (which already includes personality traits), and Occupational Interests.

Are you in the process of improving your hiring process? Download our white paper “The Interview Addiction” now.